HomeBlogCruise 2013All seismometers are back!

Second Mermaid released into the sea 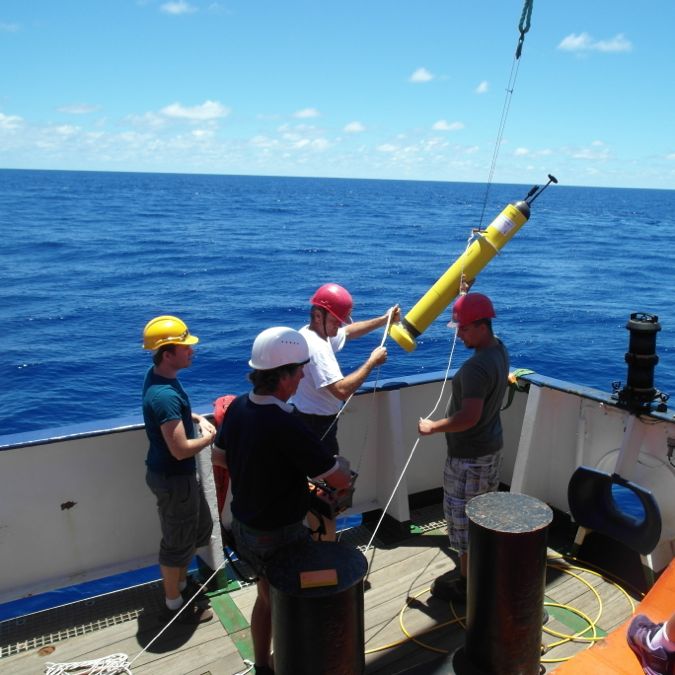 Launch of the second of two MERMAIDs, novel seismological sensors for the oceans.

Today just before leaving station RR52, we deployed a "MERMAID", a novel kind of seismological sensor for the oceans, developed by the University of Nice. A MERMAID is an Argo float that is adapted to deliver data for global-scale seismic tomography, i.e., studies that compute the 3-D structure of the earth's mantle, using signals generated by naturally occurring, distant earthquakes. Very few seismometers are deployed in oceanic areas: islands for land seismometers are sparse and unevenly distributed, and OBS are expensive and high in maintenance. The MERMAIDs, which float around passively in the oceans, are designed to fill this data gap.

Thousands of Argo floats have already been deployed by physical oceanographers, hence the "carrier" component of MERMAID technology is reliably in place. Inside sits a hydrophone to record sounds in the water column, and processing hardware and software to decide whether any of the sounds are due to earthquakes. Seismic waves traveling through the solid earth hit the ocean bottom from below, where some of their energy is converted to an acoustic wave. If the MERMAID, usually drifting at around 1000 m depth, detects this kind of acoustic signal, it rises to the surface and transmits its information to its owner via satellite communication link. Then it sinks back to the deep and waits for the next earthquake.

The two Nicean MERMAIDs were supposed to be deployed together with our RHUM-RUM ocean-bottom seismometers in 2012. They would have floated around inside our network, and signals from the two types of sensors could have been compared. Unfortunately the MERMAIDs were not finished in 2012, so that now their journey will be a lonelier one, though no less interesting. On 24/11 a sizeable earthquake (mb 5.1) occurred on the triple junction, just hours after we had recovered our station RR50 there -- no luck. But we had also released the first MERMAID there, and it has already sent home its first earthquake alert.

This email address is being protected from spambots. You need JavaScript enabled to view it. | http://www.geophysik.uni-muenchen.de/Members/sigloch