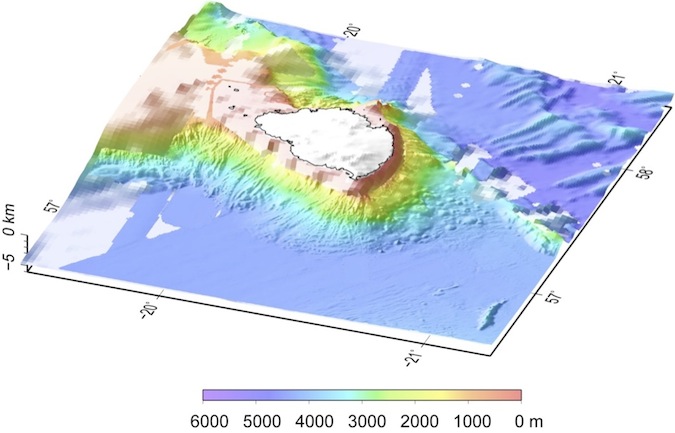 While the second leg of cruise Rhum-Rum 2 is on its way, researchers who left at the end of the first leg have started to work on the data collected during this leg. Of particular interest is the bathymetric survey achieved around Mauritius. A preliminary analysis of the raw swath data has been undertaken and the resulting digital elevation model was merged with those resulting from multibeam bathymetric data collected during previous cruises. Together, they reveal a view of Mauritius that nobody has seen so far.

Showing Mauritius as a whole, standing almost 5000 m above the seafloor (4000 m below sea level added to the 828 m of the highest mountain of the island), this new bathymetry offers a much more complete picture of the volcanic edifice than any map or photography limited to the island. Erosion gullies run down the slope from both the east and west coasts. Successive fronts of debris and sediment accumulation are clearly imaged at the foot of the southwestern slope. South of the island, many submarine volcanic edifices continue the N20°E volcanic alignment that cut across the island and produced the most recent "younger series" described by the geologists on land. Volcanic aprons observed east and southwest of the island may represent the "rift zones" which focused the volcanic activity at the origin of the shield volcano.

This preliminary map will be completed by data collected during the second leg. The older data will be reprocessed to achieve a better resolution. Although further work is required to propose a complete interpretation, it is already clear that these data will provide a new vision of Mauritius geological history.

This email address is being protected from spambots. You need JavaScript enabled to view it.

Dass Bissessur is researcher at the Mauritius Oceanography Institute. He is a marine geophysicists and a significant part of his work focuses on the Indian Ocean.

She is marine geophysicists and a significant part of her work focuses on the Indian Ocean.